About two years ago, I was taken by the idea of an adventurer management game in which, rather than participating directly in combat, you’d manage the top-level logistics of party composition, equipment, and the shuttling to-and-from adventuring destinations and rest-providing towns. Such a project began its life with a rather complex world generator, as Adventurers. After quite a bit of back-and-forth in technical foundations and overall development approach, I am happy to announce that the game, now titled Guildmaster is progressing steadily towards its first-playable alpha.

Guildmaster‘s three core areas of interaction are 1) the overworld, where the you-go-here, you-go-there orders are given, 2) the battle screen, where your adventurers’ parties show their prowess, and 3) the cities, in which you recruit, manage, equip, and heal adventurers.

When I first started the project, I put a lot of focus in a biome-based world generator that, while being an excellent experiment, was too complex of a sandbox to build a game onto. Not only was there a lot of unnecessary code to maintain, the rather sophisticated generation process was quite time consuming, hurting my favored rapid iteration approach to development. That up-front accumulation of technical debt caused me to cool off on the project for a while.

It wasn’t until I picked it back up and rewrote it from the ground up in AS3/Starling, with a more basic world generator, that I was able to focus in earnest on what mattered: the core game mechanics. 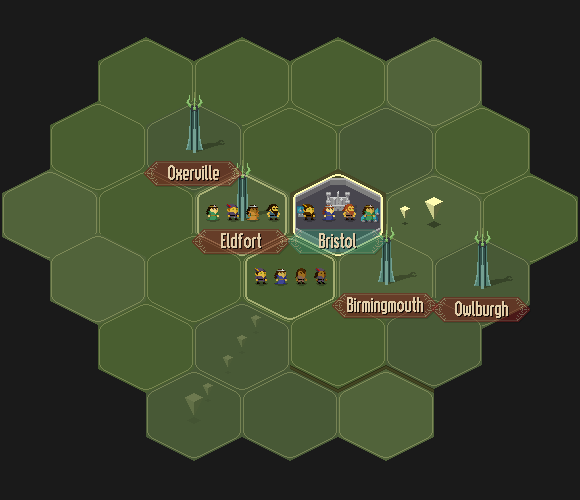 The current world only has two terrain types: plains and water (not pictured). I will, of course, be reintegrating the biomes in due time, but there are bigger fish to fry for the time being.

One of such fish is the hands-off-battle system. You can watch in realtime as your adventurers do their best with their equipment and skills, but have no means of affecting a battle once it has begun. 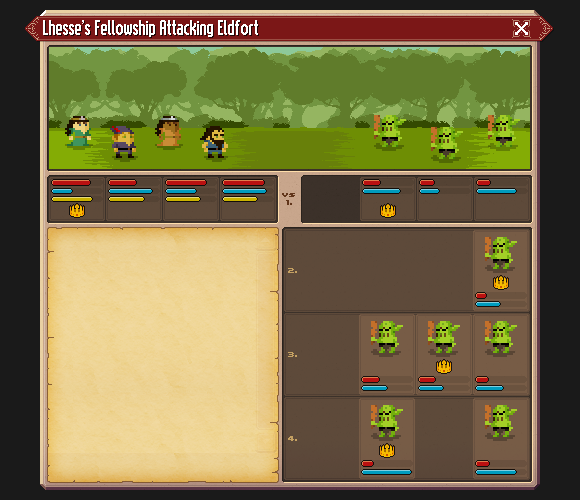 A [currently unimplemented] battle log will allow you to scrutinize in detail how well your equipment decisions have fared, while an end-of-battle results screen will summarize your adventurers’ exploits and wounds. The core of the battle system is operational, but does not yet employ character’s stats, items, etc. These subsystems will provide the meat of the management intricacies of Guildmaster and are high priority on the development list, after the third pillar of the game, city management, stands reasonably strong.

Cities of various sizes and capabilities are scatted throughout the world. These are safe havens where your adventurers will spend their hard-earned gold while resting and imparting themselves beneficial status effects. 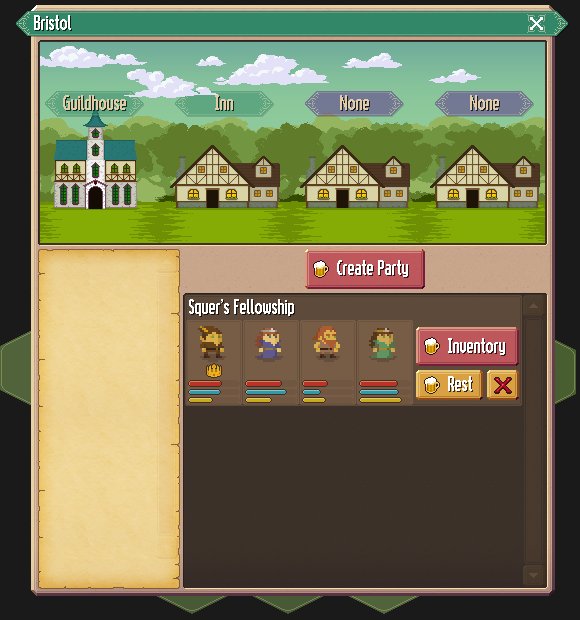 At the time of this post, the Guildhouse is largely functional with the ability to disband and create new parties. Next up is the Inn’s ability to recruit new adventurers.

I plan to have a playable first alpha this week for internal playtesting, after which I will be moving on to fleshing out character details, adding more building functionality, and implementing items. Stay tuned as I continue to shed more light on the game’s systems while they develop.